I am a ...
Provider
Employer

Of course you are! You have a mouth, don’t you? Obviously, a bright smile and fresh breath are helpful assets. And that’s doable, right? The fact is, for thousands of years humans have worked hard to be attractive and desirable by trying to clean their mouths and teeth — ever since we started developing tooth decay. And there were some bizarre solutions. But first, let’s take a look at the culprit.

Tooth decay is perhaps the oldest disease affecting humans. But it wasn’t a widespread malady until people began to increase the sugar in their diets. That includes carbohydrates, which are complex sugars. Previously, the human diet had consisted primarily of meat.

Why the sugar tie-in? Your mouth is full of bacteria. The main energy source for these bacteria is the sugar found in your diet. The byproduct is acid, which attacks the teeth and gums. The thriving bacteria also combine with mucus and other particles, continually forming the sticky, colorless film on our teeth known as plaque. If not removed, the plaque hardens and forms tartar that brushing does not eliminate. If left untreated, this plaque leads to gum disease. 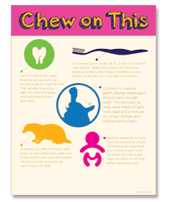 It’s a matter of historical record that Americans experienced an enormous increase in cavities when carbonated soft drinks were first introduced in the U.S. Yes, that was before improved oral hygiene. But even today, there is a substantial increase in the amount of tooth decay and tooth loss found in those who drink sodas or sugary juices on a daily basis versus those who do not.

So how do you counteract tooth decay in order to maintain your bright smile and fresh breath? Ancient Romans would gargle with urine to whiten their teeth. Really, and it worked, too. The ammonia found in urine is what did the trick. The practice spread throughout Europe and was still being practiced in some areas into the late 1800s. The ancient Chinese chewed on twigs with a special flavor to freshen their breath. And the ancient Egyptians made something like a brush by splitting the end of a twig.

Throughout history, people tried other methods to clean their teeth. Some used rough cloth and water to rub their teeth clean. Other cultures rubbed coarse substances like salt or chalk across their teeth to remove the grime. Sometimes, a powder was made from the ashes of ox hooves and burned eggshells. The ancient Greeks and Romans also used materials such as crushed oyster shells and bones.

Probably the oldest tool used to clean teeth is a toothpick. A toothpick can be fashioned from numerous sources besides wood. It’s believed the Chinese actually made the first natural-bristle toothbrush in the 1400s using bristles from pigs' necks that were attached to a handle made of bone or bamboo. It wasn’t until after World War II, when our GIs returned from Europe with their toothbrushes, that brushing became a mainstream activity.

Today, our mouths are under constant assault. The processed foods in our diet are inescapable and even so-called healthy diets carry far more sugars than our mouths were designed for. But science has given us the knowledge and the tools to fight back.

Here are some simple rules to help you enjoy a lifetime of bright smiles. Brush your teeth (preferably with fluoride toothpaste) after eating or drinking so the sugar doesn’t linger on your teeth. When you can’t brush, rinse with water. If you drink soda or sugary juices on a regular basis, drink them through a straw. Try to brush at least twice a day and floss at least once a day. See your dentist twice a year. That’s all it takes to keep your kisser fresh. C’mon, pucker up!