I am a ...
Provider
Employer

Get Defensive About Breast Cancer

In the fight against breast cancer, early detection is the best defense. Know the risk factors, understand the symptoms and take the recommended steps for screening. Education is a powerful weapon, but it has to be accompanied by action.

How Important is Early Detection?

Breast cancer is diagnosed according to four stages. When it is detected early — before it has spread — the five-year survival rate is significantly higher.

Anyone can be affected by breast cancer, even men. But certain risk factors can increase your chances of developing the disease. If you are at a higher risk for breast cancer, talk to your doctor about developing a preventive care plan that’s right for you. 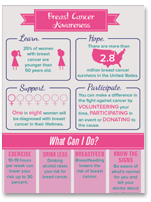 The most common symptom of breast cancer is a lump or mass — but it’s not the only sign. Other symptoms may include:

No Excuses — Schedule Your Screening

There are more than 2.8 million breast cancer survivors in the United States. When you have regular screenings and educate others about early detection, you are joining the overall fight against breast cancer.